Strike a pose, Vogue style. Balance on a pink beam. Create reflections by day and shadows at night. Color the world magenta or aqua or swirl them together. Lunch. Lounge. Laugh. Play, play, play.

However you respond to “pARC,” the new interactive art installation on the Ackland Art Museum terrace, is the right way, said its creators, The Urban Conga, a multidisciplinary design studio based in Brooklyn, New York.

“This is a way to take art off the pedestal and make it accessible to everyone, to say, ‘Please touch the art,’” said the studio’s founder and creative director Ryan Swanson. “It allows communities to put their identity on it. Instead of creating something and saying, ‘This is it,’ you’re creating something and saying, ‘This is yours. Make it what you want. This is your space to create.’ It’s great to see art institutions moving in that way.”

The name “pARC” is a play on words combining the concepts of “park,” an outdoor area, and “arc” for the series of archways that mimic the architecture of the Ackland’s façade. Imagine one continuous line of bright magenta curving to create a series of arches that appear to be growing up from the ground. The arches also frame a triptych of reflective panels, tall ovals coated with thin film filters that change color based on light and movement. The panels capture shadows cast by passersby in daylight or at night, when backlit by red, green and blue lights. At each end of the terrace, a white platform can serve as a stage, table, seat or anything else a visitor can imagine.

“pARC” is the third installation to occupy the Ackland terrace. The first was “Los Trompos,” colorful larger-than-life spinning tops designed by contemporary Mexican designers Héctor Esrawe and Ignacio Cadena in 2017. Next came “Step Right Up,” five individual stickwork sculptures inspired by ancient pouring vessels, created by Chapel Hill-based artist Patrick Dougherty and on display from 2017 to 2019.

Before selecting a new installation, the Ackland literally laid the groundwork for a green but more accessible terrace. They spread a special mesh on the ground that is wheelchair-friendly but also allows grass to grow through.

Lauren Turner had several goals in mind for the next art piece that would occupy the renovated terrace. The associate curator for contemporary art and special projects wanted something that would both give passersby a hint of the exciting artwork and programming inside the unassuming building and draw them closer to it. The installation should build on the branding created by the Ackland’s new bold magenta sign and reflect input from the community throughout the design process.

She wanted it to make the Ackland accessible to everyone, on their own schedule. “We are at the intersection of town and gown, so if you’re doing your jog at 6 a.m. or you’re meeting your friends on a Friday night, we wanted it to be utilized day and night,” she said.

Turner thought she knew the artists who could pull all this off, having seen The Urban Conga’s applications for other public art projects in the state.

“Their emphasis is very much on play, perhaps not in the way we adults like to think about it — like kids running around screaming. They think of play as an open-ended opportunity for community to form,” she said. “They create designs that encourage you to have some ownership.” 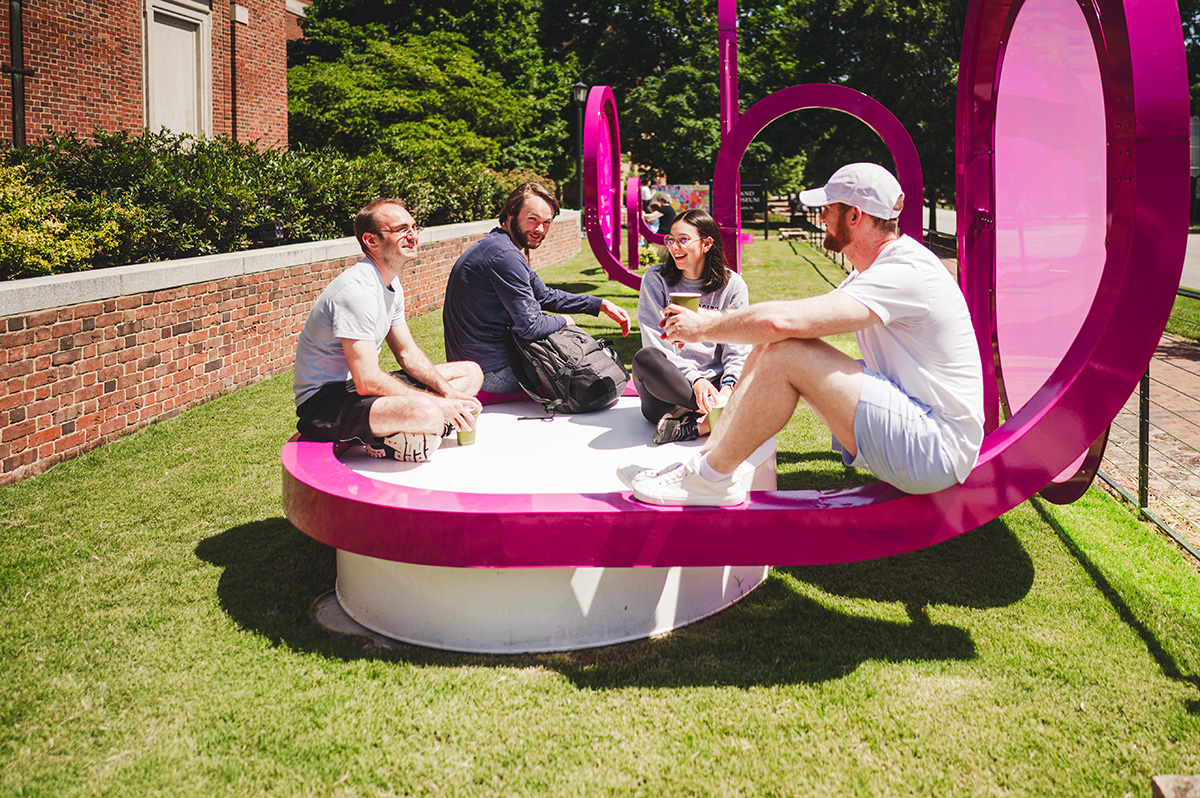 At each end of the terrace, a white platform can serve as a stage, table, seat or anything else a visitor can imagine. (Photo by Tom Waldenberg)

The Urban Conga team visited campus, reviewed studies the Ackland had done and met online with community members and museum supporters over the year-long process. Based on what they heard, they presented three different design concepts. The final design combined elements of the two most popular concepts.

“One was specifically the light and shadow play component, and one was the arches. And everybody was saying, ‘We love both. We want both,’” said Swanson during a recent visit he and his wife, architect and The Urban Conga design associate Maeghann Coleman, made to Chapel Hill to see “pARC” with the colored lights installed.

“As we get older, we separate ourselves from play. And we need it more as we get older,” Coleman said. Their designs invite people to interact not only with the art but with one another, building community. “Play is something that breaks down barriers between people. We want to redefine the word ‘play’ where it’s for everyone.”

The open-ended nature of the art means that even the designers can be surprised by how people interact with it. As Swanson and Coleman discussed their installation on that particular sunny Saturday afternoon, several participants in the Jane Austen Summer Program passed by the Ackland dressed in their Regency-era long dresses and hats. They paused at “pARC” to pose for 21st century silhouettes using the reflective panels and their smartphones.

Swanson grabbed his own phone to capture the moment. “Now that’s something I never expected,” he said.

As part of the 2nd Friday Art Walk, join a sunset celebration of “pARC,” the new outdoor terrace installation created by The Urban Conga. Make a “pARC”-inspired iridescent suncatcher and relax to a sunset soundtrack. Tag photos with @theurbanconga #acklandpARC.