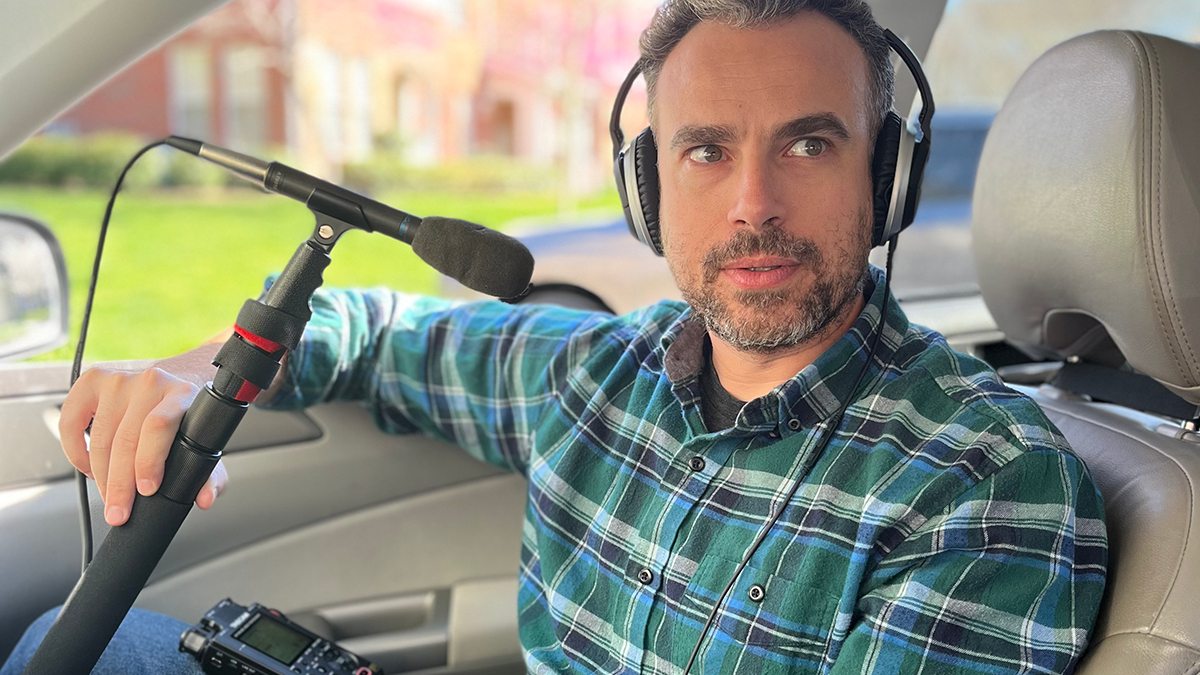 “Hi! I’m Isaac Klein. When I’m driving around with my wife, Laura, we love to look for vanity plates and try to figure out what they mean,” recent UNC Hussman School of Journalism and Media graduate Isaac Klein ’22 (M.A.) says in the introductory trailer for his five-part podcast series “VANITY: Stories Behind the Plates” on Apple Podcasts, Spotify, Stitcher and other platforms.

“Some of them seem straightforward at first,” says the East Hampton, New York, native on the VANITY trailer. “Some of them we can’t even begin to guess. Which only makes us more curious.”

VANITY: Stories Behind the Plates

On a drive with Laura last year, the 2006 University of North Carolina School of the Arts graduate was trying to come up with pitches for an audio journalism course he was taking with longtime UNC Hussman faculty member Adam Hochberg. He hit upon an idea. What if he reported the story behind not just one vanity license plate, but a whole series of them?

Bringing true stories to life and learning about the personality and life stories behind the plates — stories which turned out to be at times shocking, heartwarming and deep-down inspiring — would allow the UNC Hussman Park Fellow to showcase the skills he’d been crafting as a graduate student at Carolina. And Klein would be utilizing talents he brought with him after years of directing and writing plays, musicals and books, most notably as the assistant director of Broadway revivals Gypsy (2007) and West Side Story (2009), and as the author of “The School of Doing: Lessons From Theater Master Gerald Freedman.”

He thought the vanity plate podcast plan was too ambitious as a story for Carolina Connection, the weekly student radio program Hochberg has helped facilitate since 2008. But maybe he was onto something else entirely.

He checked the vanity plates idea out. First with Laura and friends. Then with professors he’d studied under, like Mark Robinson, director of the Media Laboratory in the communications department at Carolina; Tom Linden, Glaxo Wellcome Distinguished Professor of Medical Journalism and the Director of the M.A. in Media and Communication program at UNC Hussman; and John Biewen, audio program director and host of “Scene on Radio” at Duke University’s Center for Documentary Studies.

“I initially had trouble envisioning what an entire series about license plates would be, but found what Isaac came up with very impressive,” says Kate Sheppard, an adjunct faculty member and managing editor of The Assembly, whom Klein worked for as a teaching assistant for three semesters. “He did an impressive job of using what a driver says in that limited number of characters as a way into who they are and their life story. It’s quirky, creative and delightful.”

“It’s been a wonderful vehicle,” he says from his Chapel Hill home with a laugh. “No pun intended.”

So began the short flyer Klein began leaving on windshields of parked cars with interesting vanity plates, asking the car’s owners to contact him to tell their stories. He recruited family and friends to distribute flyers too, whenever they found a particularly intriguing plate.

“To my surprise, people got back to me,” says Klein. He ended up collecting 19 recorded interviews with people over the phone and Zoom. The tough part: curating it down to five tales that would bring a podcast season’s breadth of both content and tone.

“A lot of the stories were wonderful,” says Klein. “What a great problem to have!”

He reached back out to five drivers, all of whom agreed to meet with him to talk about their license plates and their lives.

“Isaac is a performer,” says Associate Professor Paul Cuadros, one of Klein’s thesis advisers, pointing out the recent graduate’s national Punderdome clips on YouTube. “He grasps the idea of how to recognize a good story and make it as fun as possible or see some humanity in it.” Cuadros adds, “He’s also a very patient person. He listens to people’s stories. A good part of his professional background in the theater and [as the author of a book about] Gerald Freedman had to do with that. You need to listen to someone to be able to tell their life story.”

Learn more about VANITY and listen to episodes at Hussman.UNC.edu