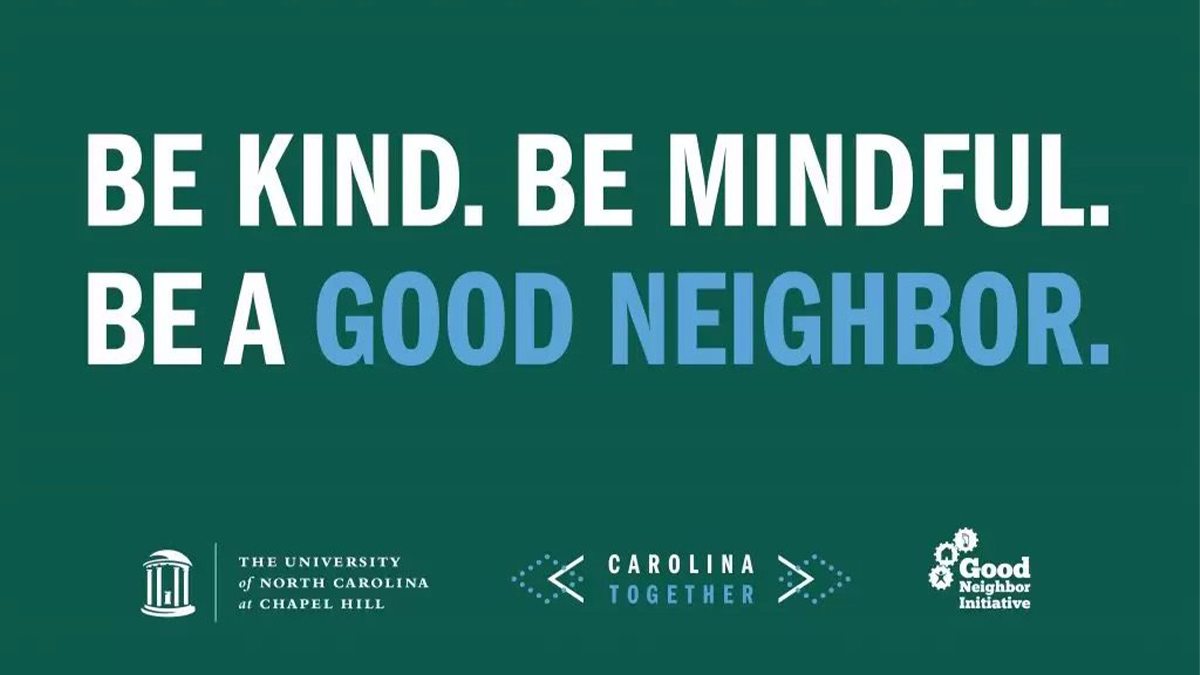 If you live near the Carolina campus and hear a knock on your door on Aug. 11 or 12, it may be folks from the Good Neighbor Initiative, back in full swing after the COVID-19 pandemic forced organizers to scale back activities.

The initiative began in 2004 with the Chapel Hill Police Department identifying houses that were having problems year after year with things like noise levels, trash collection and parking. Officers knocked on doors, welcomed new residents and let them know what they could do to be better neighbors.

A few years after the Good Neighbor Initiative was born, the program and its partners started what was originally called the Neighborhood Night Out and Block Party, now known as the Good Neighbor Community Cookout.

Inspired by the National Night Out, an annual community-police awareness-raising event that takes place on the second Tuesday of August, the Good Neighbor Community Cookout happens in September, once students are settled in. Hosted each year at the Hargraves Community Center in the Northside neighborhood, the event features free food, a DJ, dancing and many community vendors, partners and nonprofits.

This year’s community cookout, scheduled for Sept. 28, which is also National Good Neighbor Day, will be the first since 2019.

The pandemic shaped the Good Neighbor Initiative in other ways as well, including a pause on the program’s signature door-to-door “knock and talks.” The initiative was able to resume those in the fall of 2021, once again recruiting dozens of volunteers to knock on 1,200 doors of both students and long-time residents in the Northside, Pine Knolls, Cameron-McCauley, Lloyd-Broad, and Westwood neighborhoods and the southern MLK, North Street, Columbia Street, Dawes-Coolidge and Davie Circle areas. During knock-and-talk conversations, volunteers cover a lot, said Aaron Bachenheimer, executive director of off-campus student life and community partnerships in Student Affairs and a leader of the Good Neighbor Initiative.

They explain what the program is and give students a better understanding of the rich cultural history of the surrounding areas and the community standards they are expected to follow. Volunteers also share tips for safe and respectful living and inform students and long-time residents alike of the benefits of getting to know their neighbors.

“Which isn’t necessarily true,” she said.

Another common assumption students make is that all their neighbors are students, Dubois said.

“They don’t treat their older neighbors or their family neighbors like they would in their neighborhoods at home because they just assume that it’s other 20-year-olds,” she said.

The knock-and-talks help build mutual respect by reminding students that they are living in residential neighborhoods and assuring long-time residents that students are understanding.

“I’m a student, too,” Dubois said. “I understand completely wanting to be comfortable where you live and make noise and have parties.”

But it’s important to do things like talk with your neighbors before or after events, she said. Little gestures like that can lessen the tensions between the communities.

What locals can do

There are also things long-time residents can do to get to know their student neighbors better.

Kurt Ribisl, Jo Anne Earp Distinguished Professor and department chair in the Gillings School of Global Public Health’s department of health behavior, has lived in the Cameron-McCauley neighborhood for 22 years.

He said that long-term residents are aware they live in a college town and choose to be where they are for a reason.

“People who don’t want to be around a vibrant downtown area will often pick somewhere out in the country or somewhere in a subdivision,” Ribisl said. “But I think these are really fun and eclectic neighborhoods that draw energy from the students and the residents who live there.”

He said that his neighborhood is mixed, with young students, families and retirees.

“The key thing is getting to know people and being courteous,” he said.

Residents know that the first week of classes will see students reuniting with their peers, which often leads to disruptive gatherings. Ribisl said that it is important to find alternatives to calling law enforcement because these issues can often be averted with a simple text.

“Go back to old school, go back to meet your neighbor,” Kathy Atwater, the community advocacy specialist at the Jackson Center, said. “If you see them out on the porch or in the yard, speak. Say ‘hi’; introduce yourself. And just be friendly.”

That’s something that has improved over time — neighbors are more likely to speak to one another, and long-time residents feel less ignored.

Atwater has lived in the Northside neighborhood all her life.

“Growing up, we knew everybody in the community,” she said. “So it’s important that neighbors continue to know neighbors and those who live among you. Because it is a community. It’s a friendly community, and we want to keep that same spirit of neighborliness.”

She has been with the Jackson Center as a staff member since 2017 but participated in events like the Good Neighbor Initiative prior to that. She said she is glad the program continues because each year, new students move into the neighborhoods.

In addition to the knock-and-talks, the initiative hosts follow-up events throughout the year, including:

It all kicks off with the team going door-to-door this week. So if you hear a knock, answer it — you’ll learn a lot about your neighborhood’s history and how to be a better neighbor.

Read stories about faculty and staff at TheWell.UNC.edu