During her hour on stage, the Olympic medal-winning gymnast Laurie Hernandez did not do a handspring or aerial cartwheel or even a scissors kick. Not a single floor move.

Instead, the animated, down-to-earth 22-year-old spoke to a capacity crowd in the Frank Porter Graham Student Union’s Great Hall about her longtime struggles with crippling anxiety, depression and imposter syndrome.

The audience hung on every word.

Hernandez’s Latinx Heritage Month keynote talk aligned perfectly with this year’s theme — “Vivir Mi Vida,” or “Live My Life” — which encourages students and others to express their authentic selves. The theme, Carolina Latinx Center Director Josmell Perez said, is fitting following two years of a pandemic that led many to re-examine what is important to them.

One thing that is important to Hernandez is sharing her story with others who might be inwardly struggling.

“I am a talker, and I am going to talk about mental health — depression, burnout, anxiety. Because that was my experience, and I know I’m not the only one,” she said.

Based on the frequent applause and snaps of approval from the more than 500 attendees, her message hit home. One reason is that the majority were college students, and so is Hernandez. She’s studying acting at New York University. Another is the shared Latinx heritage. “I’m Puerto Rican through and through,” she said. “I carry it with me everywhere I go.”

Pacing the stage and punctuating her words with playful pantomime, Hernandez wove her hard-won insights into a series of stories about career low points, many involving heartbreaking injuries. In 2014, while chasing her Olympic dream, she was sidelined for a couple months for a broken growth plate in her wrist. She finally got her cast removed and was preparing to compete again when she landed wrong during a skill on the vault. She dislocated her knee, tore a tendon and had to get surgery. That sidelined her again, this time for the rest of the year.

“There’s something really humiliating about literally sitting in the corner of the practice and watching all your friends and teammates do the thing that you want to do,” she said. “It’s like FOMO to the highest degree.”

Two years later, at age 16, her dream came true when she qualified for the 2016 Olympics in Rio de Janeiro. There, she won the team competition gold medal and individual silver on the balance beam. That same year, she and partner Val Chmerkovskiy won season 23 of “Dancing with the Stars.”

She has since published a memoir, “I Got This: To Gold and Beyond,” and an illustrated childrens book, “She’s Got This.” 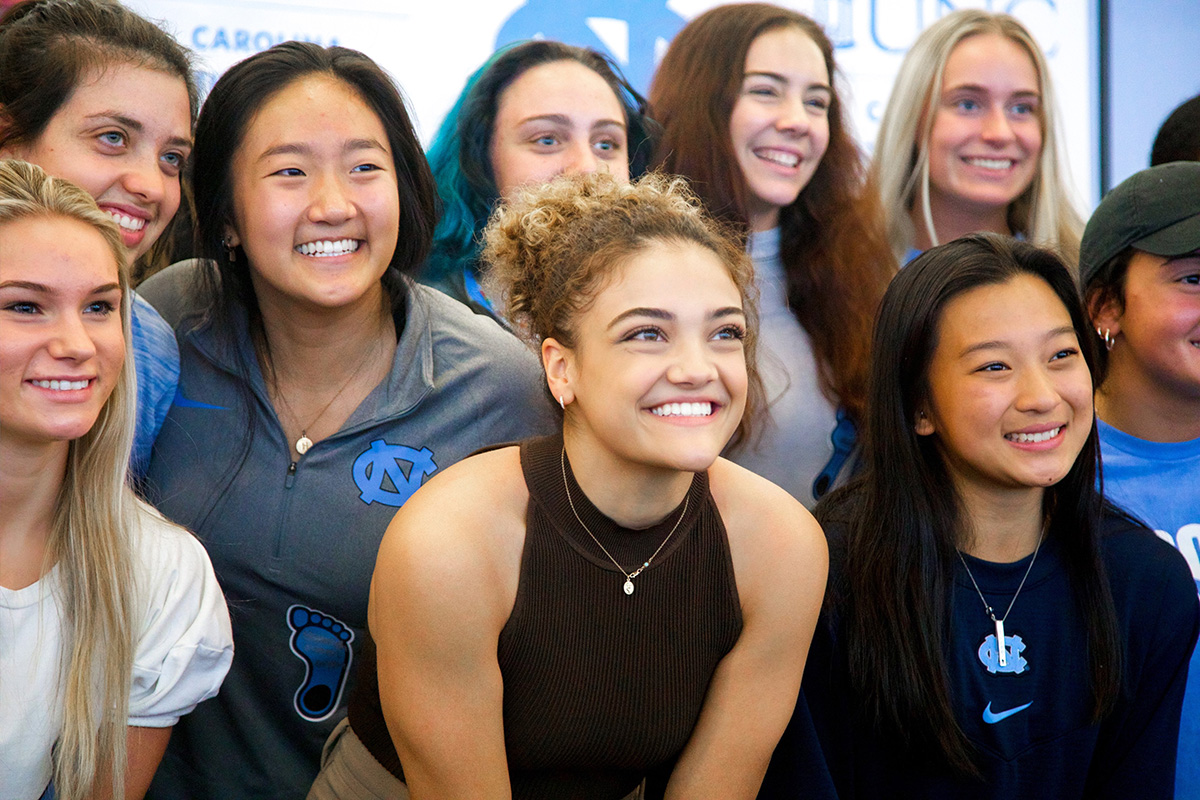 If Hernandez dwelled on her low points, she breezed over the high points. To win the silver, Hernandez placed ahead of Simone Biles, arguably the greatest gymnast of all time, though she never mentioned that.

Instead, she told a self-deprecating story about how starstruck she was during the Olympic trials that year. Hernandez was on the floor tearing strips of tape when first Gabby Douglas walked in and then Aly Reisman. Next, every head in the room swiveled toward the door, and Biles walked in. “And there’s me kneeling on the floor sticking my tape to a chair, thinking, ‘Hey guys, I won elite nationals in my junior division last year!’ These are all-around Olympic champions, all-around world champions,” she said. “I don’t deserve to be here. How I got in was an accident.

“You can imagine what my imposter syndrome was thinking: ‘Let’s hide in her backpack. Let’s go everywhere she goes,’” she said.

Instead of trying to avoid the thoughts of inadequacy or “power through” the bad feelings, she learned to live with them. “When imposter syndrome hits, you have to look it in the eyes and say, ‘I see that you’re there, but I’m not going to push away. You sit as long as you want,’” she said. “Things only grow if you let them, and they grow bigger when you try to push them away.”

Hernandez said it took years of time away from gymnastics, therapy, journaling and talking to people to reach the point where she can be honest and accepting of who she is.

“Who here has experienced burnout?” she asked the crowd at one point, pausing to marvel at the response. “That’s just a huge show of hands.”

When you feel burned out, take a break, she said.

When people call her fearless, she pushes back. “I hate being called ‘fearless,’ because it’s false. I am anxious, and I am scared,” she said. “What I do like is brave.”

Again, she addressed the crowd. “Remember that every single one of you is brave just for being here,” she said. “You’ve all done something that scared you, and you’re still here. Congratulations. So stay brave, stay kind and, dear God, please take a break.”

The keynote talk was sponsored by the Carolina Latinx Center, the Carolina Union Activities Board and Student Life and Leadership.