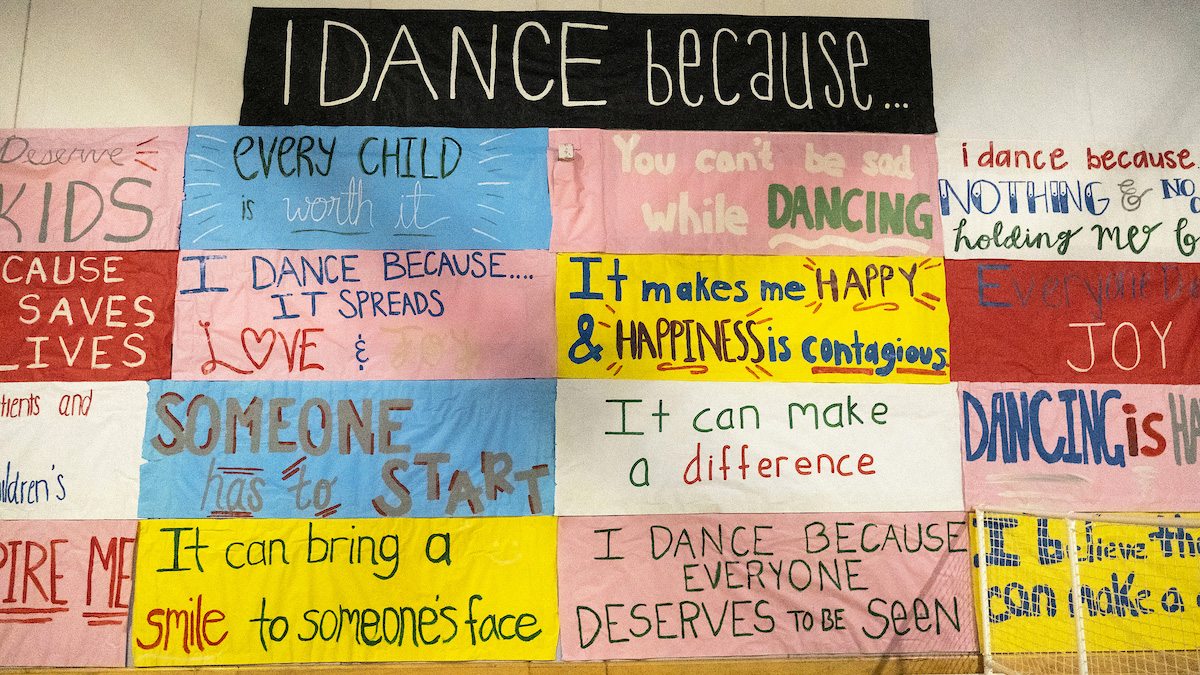 Leaders of Carolina for the Kids, the student organization that puts on the Dance Marathon fundraiser to benefit the UNC Children’s Hospital, moved the party online in accordance with the University’s efforts to mitigate the spread of coronavirus.

“We’re going to make the most of it,” Kalina MacKay, a Carolina senior and the publicity chair of the student group, said ahead of the March 20 event. “We can’t be together in person, but there are other ways to make it happen. I know the situations that many of the children and families are in at the hospital are so unpredictable, and they never give up, so we’re channeling that right now. We need to not give up.”

A signature spring event, Dance Marathon has taken place every year at Carolina since 1999 and usually packs hundreds of dancers into Fetzer Gym for an all-day, all-night party. Each year, participants pledge to keep moving for 24 hours in exchange for donations to the hospital.

This year, Carolina for the Kids asked people to participate in a 24-hour social media campaign that was led primarily through the group’s Instagram, Facebook and Twitter accounts. Despite the last-minute challenges, the 2020 Dance Marathon raised $256,569.

The funds, MacKay said, will support Carolina for the Kids’ programs at UNC Children’s Hospital next year.

“I’m really proud of what we accomplished,” she said.

Over the span of 24 hours, the virtual Dance Marathon reached nearly 14,000 people as the group shared videos, graphics and other content ideas for users to share to their social networks to help fundraise.

And, in Dance Marathon spirit, participants were encouraged to share videos of their own dance moves through TikTok videos.

The group’s quick move to a virtual event came together following announcements from the University that events of 50 or more people on campus would be canceled. A chain of group texts circulated among Carolina for the Kids leaders and the group initially settled on simply posting videos and other content they had created to social media as a way of recognizing the hard work of their members throughout the year.

But as MacKay and the group’s creative media chair, Matthew Gibson, began working on the materials they wanted to share, an idea struck them: As long as their group was posting to social media, why not just turn it into an event and ask everyone to join?

“It was heartbreaking not to be able to have the marathon the way we were used to, but then we saw a way to have a presence,” said Gibson, a junior at Carolina. “We were like, ‘All right, we’re gonna do this.’”

Even with the altered format of the event, Carolina for the Kids Executive Director Michelle Cooley said, the group had several objectives in mind. First and foremost was the mission to benefit patients and families at UNC Children’s Hospital.

Cooley also saw the virtual event as an opportunity to bring the Carolina community together at a time where people may feel disconnected from their friends and loved ones. Cooley, a senior, viewed it as a chance for her friends to fall back on a familiar and fun event.

“Everything seems flipped upside down and turned around in every direction, especially for seniors,” Cooley said. “We hope that this is a chance to maintain continuity instead. Hopefully, it brightens people’s outlook and gives them a way to come together.”