I need something beautiful, Edwin Alderman thought as he looked out his South Building window in spring 1897.

Recent years had been anything but beautiful for the University’s president. His wife of 11 years, Emma, died at 38 in May 1896. Their three children had all died before the age of 6.

Alderman looked at the dilapidated wooden hut covering Carolina’s main water source. He’d often seen men ride up on a horse, dismount in a small dust cloud, crank up the water bucket, tip the ladle to their lips and, sometimes, offer the bucket to the horse.

Such a squalid little structure doesn’t fit in a place of higher learning like this university, he thought.

Right then, he “determined to tear it down and put something there having beauty,” as he wrote in a 1925 letter to his niece, Mary Rees, which is also how we know what he was thinking that day. Alderman wrote of his “great desire to add a little beauty” to “the grim, austere dignity” of campus. “Looking out of my window on the first floor of the South Building, I beheld the old well squalid and ramshackled,” he wrote. He expressed admiration for “the little round temples which one sees reproduced so often in English Gardens” and how the Temple of Love at Versailles served as inspiration.

He wanted something to represent, in his words, the transformation, beauty and power found on the Carolina campus. Still, at least one professor objected to the project. The two had words or, as Alderman wrote, “a fine shindy” over the $200 cost. The president won that shindy.

In “Well Worth a Shindy,” author Sarah Brandes Madry notes that Alderman’s ideals meshed nicely with a design by Eugene Harris, the University’s registrar, who had honed his artistic skills at New York’s Cooper Union, and the construction supervision of Joshua Gore, dean of Carolina’s School of Mines and trained in civil engineering.

By the end of 1897, a rotunda with eight fluted Doric columns and a copper dome covered the well.

When it became the ‘Old Well’

The well has been a water source since 1795. Other wells were dug on the small campus within a few years and more over the ensuing decades. One across from the original Memorial Hall was under what some called a pagoda, which also fell into disrepair. Another well south of New East probably aided meal preparation at Steward’s Hall. There was nothing special about yet another well among many.

By the time Alderman wrote his 1925 letter, “old well” had been used for years. A poem in the 1907 edition of Carolina’s yearbook, the Yackety Yack, used the lowercased phrase “same old well.” In May 1917, the Daily Tar Heel recommended that new students stop by the well to taste the “nectar.”

The well had become something special. Drawing of the Old Well from Carolina’s 1922 Yackety Yack yearbook.

Author Thomas Wolfe may have cemented the use of “old well” and conferred magic on it when he wrote in the 1921 Yackety Yack about Carolina alumni who “drank from the old well and then went out into the State carrying the waters of life.” Most famously, Wolfe’s oft-quoted poem “1920 Says a Few Words to Carolina” conjures many memories for Carolina alumni, among them the “white old well.” By 1949, when the honorary society Order of the Old Well was formed, the name and its importance were lodged in the campus mythos.

The December 1897 North Carolina University Magazine reported on construction of the new “little Grecian Temple.” Then, in a radical imagining, the magazine described Alderman’s structure as being painted in “the national colors,” implying the use of patriotic red, white and blue. In 1900, the Board of Trustees had a pump substituted for the bucket and chain and, in 1925, a drinking fountain replaced the pump, according to “Well Worth a Shindy.” The biggest change came in 1953 when the structure’s deterioration dictated a renovation. University administrators approved a plan to largely reproduce Alderman’s design, but with the addition of the fountain’s stone pedestal.

In 1954, crews demolished Alderman’s structure and constructed the Old Well that we know today, complete with a new water source — town water.

In 2001, a Facilities Services plumbing crew installed a special valve so the fountain would not freeze during cold weather. That crew pulled back the pedestal to see the original well-lined with stones set in 1795, a sight not seen since 1954.

Durwood House, a retired lab tech mechanic, supervised the crew. He said that the shaft is offset about 2 feet from the fountain. The stonework was clean, probably because any dirt was “washed away over the years.” They tied a wrench to a string and lowered it into the shaft. After hearing a “plop,” they pulled up the slack. The shaft measured 42 feet with 12 feet of water.

A 2019 restoration repaired three columns. Landscaping has fluctuated from none to periods when 1930s jalopies parked willy-nilly in the dirt around it to riotous colors of azaleas and flowers added in the past few decades. With no landscaping around the Old Well in the 1930s, people could park their jalopies all around it. (Folder_0391_Old_Well_New, Wilson Library, Special Collections, UNC-Chapel Hill)

Before Alderman’s time, the Instagram spots of the day were in front of campus buildings like Playmakers Theatre. The Yackety Yack’s predecessor, Hellenian, shows sports teams posing in such places. In its temple form, the Old Well became a backdrop for photos throughout a student’s time at Carolina, from first-day-of-class sips to poses in graduation robes and, for some, shots taken on their wedding day.

Barry Joyce, a retired Facilities Services manager, worked on the Old Well and supervised plumbers who maintained it. Despite having a vocation that reduces the Old Well to pipes, fittings and valves, Joyce embraced its romantic qualities, posing with his wife beside the Old Well for wedding photos. Innumerable nuptials have been documented the same way.

So the structure’s promotion of high ideals includes personal transformations. Alderman would be pleased.

Perhaps today’s first-year class is young enough to use “time-honored” to describe the tradition of sipping from the Old Well on the first day of classes to ensure academic success, but it’s more likely a tradition that has grown since the 1980s. 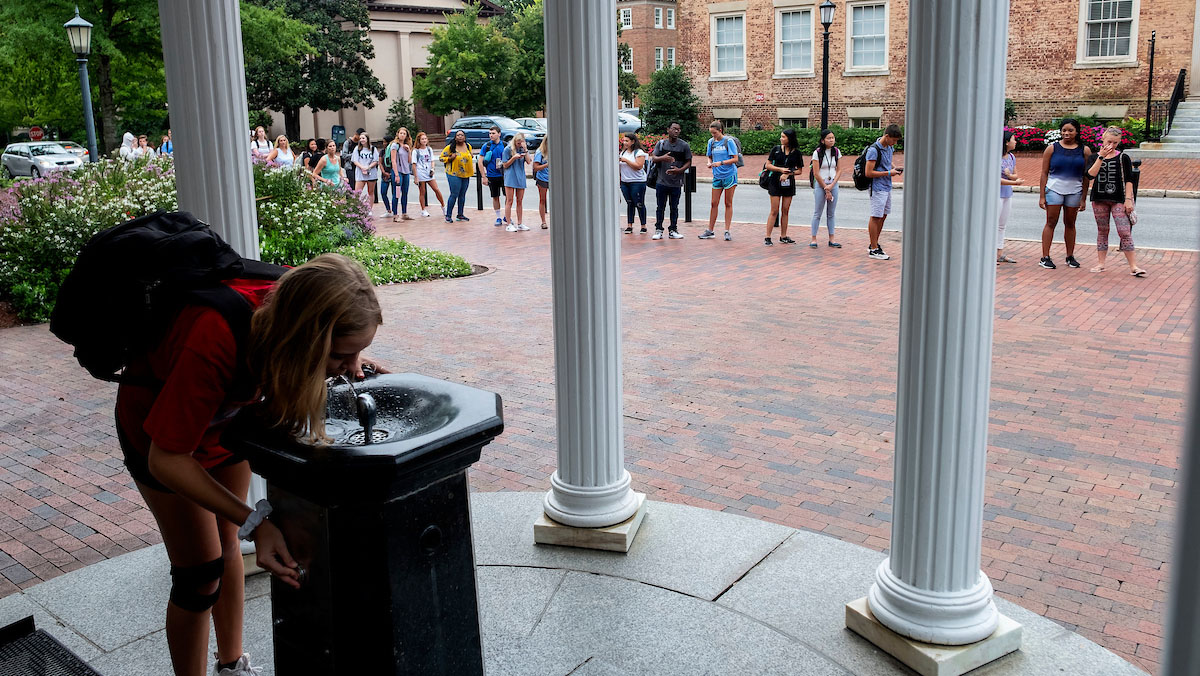 Students take a sip from the Old Well on the first day of classes on the campus of the University of North Carolina at Chapel Hill August 21, 2018. (Jon Gardiner/UNC-Chapel Hill)

A Class of 1976 alumna quoted in a 2002 Daily Tar Heel article said some students did it during her student days. Some alumni from the 1970s and 1980s remember taking a sip for good luck on exam days. In July 1985, the Daily Tar Heel first promoted an FDOC sip as a way “to have good luck in classes.” It ran a back-to-school photo of the Old Well with similar language through at least 1992. Since 2000, the University’s website and, later, social media have featured articles and videos about the FDOC sip. Long lines each FDOC attest to the tradition’s popularity.

The feeling that a few drops of water imbue students with good luck on the first day of class is just a small part of the Old Well’s magical beauty. It’s hard to think of it as it once was, “a plain old country well” on “a sloppy, dirty old spot” — Alderman’s words from a 1929 letter to Daniel Grant, director of Carolina’s Alumni Loyalty Fund. Nearly 125 years after its creation, the Old Well, as Alderman wrote, “has stolen into the hearts of people as beauty in any sort of form has a way of doing.”