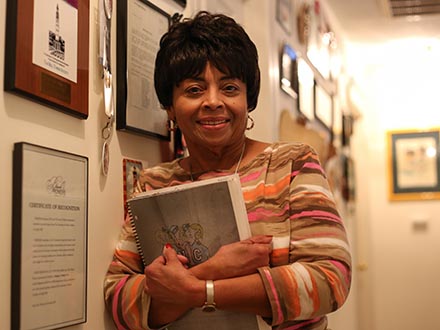 The first time Karen Parker learned about segregation, she was 5 years old.

Mickey Mouse was coming to her hometown of Winston-Salem, N.C., and she wanted to go. But she couldn’t — just because of the color of her skin.

“I got very angry,” said Parker, whose mother told her that the show was for white children only. “It was my first time being aware of the racial difference. I think I stayed angry about the Mickey Mouse thing, so whenever I had a chance to overturn what I thought was wrong, I was going to be out there.”

She got that chance in 1963, when she arrived at the University of North Carolina at Chapel Hill as the first African American undergraduate woman to enroll at the University. At Carolina, she continued to fight for her rights while earning a bachelor’s degree in journalism.

“I knew going in that it was going to be tough,” she remembered recently. “Our [high school] guidance counselors singled out some students who they believed could make it academically and were tough enough to survive in an unfriendly environment. And of course we knew that was not going to be any fun. We knew we were going to meet the same kind of prejudices we saw every day of our lives.”

Parker, now 71, will celebrate her 50th class anniversary this spring, but to get there she walked a fine line of being both a student and civil rights activist. While classmates were focused on their studies, Parker mixed sit-ins and protests with her homework.

“I just wanted to be like any other student, but it wasn’t going to happen,” she said.

Before attending UNC-Chapel Hill, Parker spent two years studying at the Greensboro Women’s College — a requirement then. After her freshman year at what is now UNC-Greensboro, Parker stumbled into journalism when she filled in for the Winston-Salem newspaper’s only black reporter, Luix Overbea.

During that time, she wrote and prepared two weeks of the Sunday pages of news and events for the Winston-Salem black community.

“The pages really looked awful, but it got done,” she said. “After that, he [Overbea] recommended that I join the Winston-Salem Journal’s summer intern program. His other piece of advice was to apply to UNC’s journalism school, which I did.

“Graduating from UNC’s journalism school definitely changed my life for the better.”

Transferring to UNC-Chapel Hill in 1963 “opened a whole world,” Parker said. But it also presented the same harsh realities she experienced her whole life.

To her parents’ dismay, Parker didn’t back down from participating in the civil rights activities — and was arrested and jailed twice. She participated in sit-ins, protests and marches, including blocking the intersection of Franklin and Columbia streets after a basketball game.

“Behaving myself was not my nature,’’ Parker said.

Although the protests, Parker said, were considered unsuccessful and failed to change much of Franklin Street, the area finally desegregated during Parker’s senior year following the Civil Rights Act of 1964.

Inside the classroom, Parker worked to excel and to show other students that she wasn’t inferior to them in any way. If there was an award she could win, she tried. If there was a position she could run for, she did.

“I also wanted to win hearts and minds,” Parker said. “I won some and didn’t even make a dent in others.”

Her efforts led to the Dean’s List and a position as editor of the journalism school’s newspaper. She also won a journalism scholarship for her senior year, participated in the University’s Toronto Exchange and was accepted into the Order of the Valkyries,a women-only honorary society.

“Looking back, I really felt that I should have done more, but really there was not much more I could have done,” she said.

Although Parker was the only black woman in her class, five black men also graduated in 1965. They eventually became a heart surgeon, a rear admiral in Navy Intelligence, a researcher at Brookhaven National Laboratory, a biology professor and a certified public accountant.

Parker, meanwhile, went on to a successful career as a copy editor with stints at several major newspapers including 15 years at the Los Angeles Times.

Today, she lives in Greensboro and is proud of her efforts to work toward change at Carolina and make way for future students.

“All the brash things I did were things I felt needed to be done,” she said. “…I had to be a role model for those who came behind me.”

Read more: Parker kept track of her experiences in a diary. The writings, which are now in the Wilson Library, trace her experiences during her two years at UNC-Chapel Hill. Click here to view the diary.