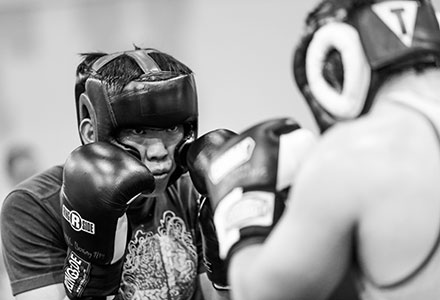 It’s a small, hidden stairway on the side of Eddie Smith Field House.

With just a few punching bags, jump ropes and four wooded posts stuffed in a dusty corner, the room looks like any other storage closet.

But at night, when the posts are combined to create a makeshift ring on the facility’s artificial turf and the bags are chained up, the room becomes the hub to one of the University’s ever-growing clubs — and one that has quietly been bringing national accolades back to Chapel Hill for years.

For nearly a decade, the co-ed Carolina Boxing Club has been teaching inexperienced boxers the ropes of the sport and creating championship-caliber fighters along the way. With past fighters bringing home national titles and current fighters on the cusp of doing the same, the team has quietly found success against the best college boxers.

“If you want to compete seriously and go for a national championship, this is the place to do it — regardless of experience,” said team president Patrick Walsh, a senior physics major in the College of Arts and Sciences at Carolina.

Established as an official member of the National Collegiate Boxing Association in 2006, Carolina Boxing has been represented in a national title fight twice. It also has had fighters finish in the top three of its region 10 times.

But the club doesn’t just focus on the five members who will compete in the ring. It also works with the hundreds of students interested in the sport — creating a pipeline of talent to keep the team competing on a national scale.

Holding a series of contact and non-contact training sessions during the week, the advanced boxers serve as trainers to teach the sport to the masses.

Each week, the group holds non-contact sessions that teach the fundamentals. The majority of those attending the club arrive with no prior experience, so lead trainer Matt Kimble, a political science and public policy major in the College of Arts and Sciences, is tasked with teaching the complex sport to the more than hundred fighters who show up.

“We have a few people that come in every year with some experience, but the vast majority who come in have never done it before,” Kimble said. “We start from the ground up and work everybody up to teach them all the punches and defensive maneuvers.”

The two-hour sessions are broken up into three components of cardio, strength and conditioning, and technique. The intensity of the workout, Walsh said, was the main thing that drew him to the sport as a freshman, even though he had no experience with it.

“If you’re looking for a sport that gets you in great shape, boxing is the way to go,” he said.

Beginner classes start with learning how to make a fist, then move to teaching footwork, the six different punches and work with bags to give the new boxers a glimpse of the sport.

After at least one semester in non-contact sessions, boxers then have the option to move up to contact sessions — the next step to competition. But the move isn’t essential.

“You only get hit if you want to,” Kimble said. “You can be involved in Carolina Boxing for four years and never been in a contact practice.”

Walsh, however, saw moving to contact training as the obvious next step after completing his first semester in noncontact sessions.

“I had learned all these things: I learned how to hit mitts, how to hit bags, how to move,” he said. “Then it was like, ‘What good is that if I don’t know how to apply it?’”

Once comfortable taking a punch in the ring, boxers can try out to join the team, which travels throughout the country to compete against the country’s best collegiate boxers and ultimately battles for regional and national titles.

For many fighters, the progression to the team is a lengthy process.

For others like Jake Beeson, a junior biology major, the transition from non-contact sessions to sanctioned fights took only one year. Joining the team as a freshman, Beeson finished his sophomore year with a third-place finish at the national championships.

The transition from non-contact to competition, however, isn’t always smooth.

“When you’re first starting out and you’re not used to it, getting punched in the face in front of a lot of people isn’t really enticing.”

Walsh, who competed in his first fight as a sophomore, said the move to competition wasn’t an easy jump. But eventually, habit kicks in.

“It’s so much different when a hand is coming at you,” he said. “You learn all these combinations, all these movements, and when you get into the ring that just becomes second nature. You just sort of kick into instinct.

“When you get into the ring, it’s you and your opponent. You have to move, you have to hit back. You know you’re going to get hit — it’s inevitable. You have to be able to take that hit and keep moving forward.”

But that step of getting into the ring isn’t for everybody — or even a goal for many club members, Kimble said. Whether it’s fighting for national titles or shadow boxing to get in shape, Carolina Boxing has a spot for everybody.