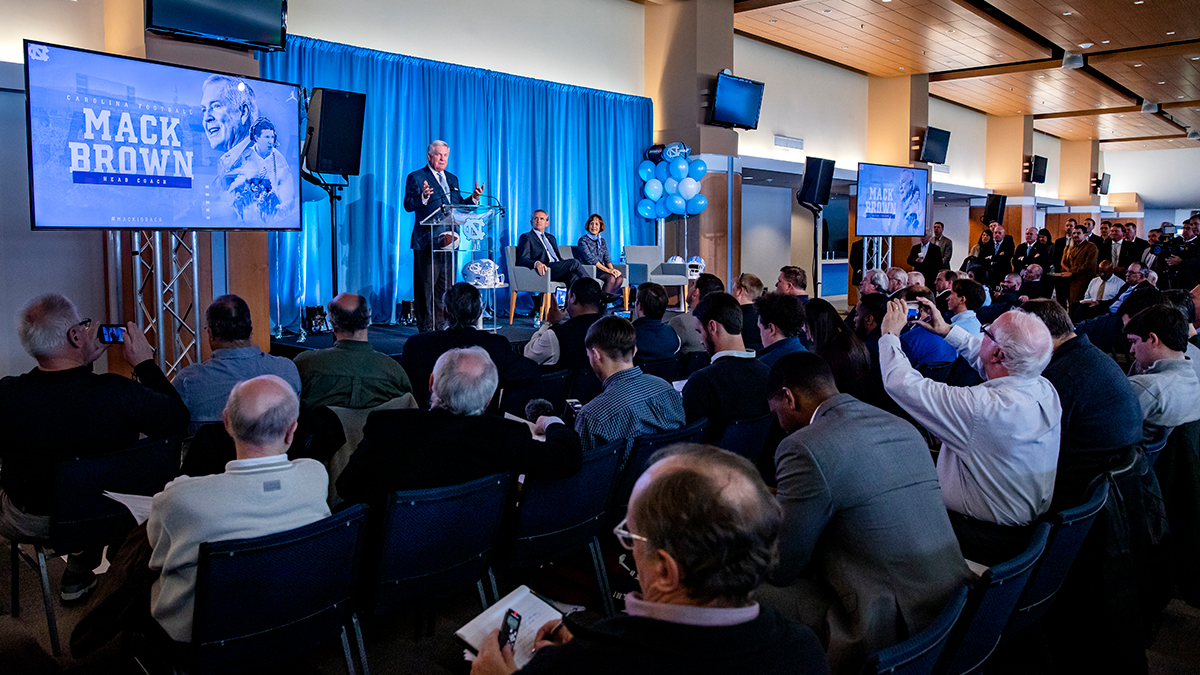 Mack Brown, whose charismatic style and disciplined approach propelled the University of North Carolina’s football program to the top 10 and the University of Texas to a national championship, is returning to Chapel Hill with the goal of leading another Tar Heel resurgence.

Brown, who will be inducted into the National Football Foundation’s College Hall of Fame in December, won more college football games than any coach in the country over a 24-year period from 1990-2013.

He was previously the head coach of the Tar Heels from 1988 to 1997. He led Carolina to three 10-win seasons, six consecutive bowl games and two top-10 AP finishes. At Texas, the Longhorns won the 2005 BCS national title, two conference titles and four Big 12 South Division titles.

“Mack Brown has a proven record of building great teams, and he doesn’t just develop football players – he also develops people of strong character,” said Director of Athletics Bubba Cunningham. “He knows how to win championships, and he expects his student-athletes to win in the classroom and community, as well. We are excited about his plans for our football program, and I am thrilled to welcome Coach Brown and wife Sally back to Chapel Hill.”

Brown will be introduced as the Tar Heels’ head football coach at a press conference at noon today (Tuesday, Nov. 27).

“Sally and I love North Carolina, we love this University and we are thrilled to be back,” Brown said. “The best part of coaching is the players – building relationships, building confidence, and ultimately seeing them build success on and off the field. We can’t wait to meet our current student-athletes and reconnect with friends, alumni and fellow Tar Heel coaches. We thank UNC’s Board of Trustees, Chancellor Folt and Bubba Cunningham for supporting our return to the Carolina family.”

Brown originally came to Chapel Hill after head coaching stints at Appalachian State (1983) and Tulane (1985-87). The Tar Heels went 69-46-1, posted winning records in each of his final eight seasons and finished in the AP top 25 four times. The 1996 team went 10-2, beat West Virginia in the Gator Bowl and finished No. 10 in the AP poll. A year later, Carolina was 10-1 in the regular season and was No. 4 in the final coaches’ poll and No. 6 in the AP poll.

“This is a big day for Carolina,” said Chancellor Carol L. Folt. “We are welcoming back a coach who built a winning football program during his first tenure in Chapel Hill – one that reflected the values, culture, and commitment to the excellence we aspire to in everything we do at this University. While chancellor, I have gotten to know Mack and have always admired his commitment to the success of student-athletes and passion for the college game. I’m looking forward to welcoming Mack and Sally back home to Carolina.”

At Texas, Brown went 158-48 (.767) from 1998-2013. The Longhorns won 10 or more games in nine consecutive seasons, the second-longest streak in NCAA history, finished in the AP top 10 seven times, played in bowl games in a UT-record 12 consecutive seasons and set a school record with 10 bowl victories. He was national coach of the year in 2005 and 2008. In addition to winning the 2005 national championship by beating No. 1 ranked USC in the Rose Bowl, the Longhorns played in the national title game in 2009.

Brown has a 244-122-1 overall record in 30 seasons as a head coach, and stands 10th on the all-time wins list. He is second in all-time wins at both Carolina and Texas.

The NFL selected 108 of his players in the NFL Draft, including 22 first-round picks (six Tar Heels and 16 Longhorns).

Eighty percent of his players at Carolina earned their degrees; at Texas, more than a third of his players earned 3.0 grade point averages and were named to the Big 12 honor rolls. From 2006-13, Texas placed a league-high 159 players on the Academic All-Big 12 team, 35 more than any other school.

The Cookeville, Tennessee native played collegiately at Florida State. He worked the last five years as a commentator for ESPN. He and his wife Sally, who met in Chapel Hill, have four children (Barbara, Chris, Matt, Katherine) and six grandchildren.