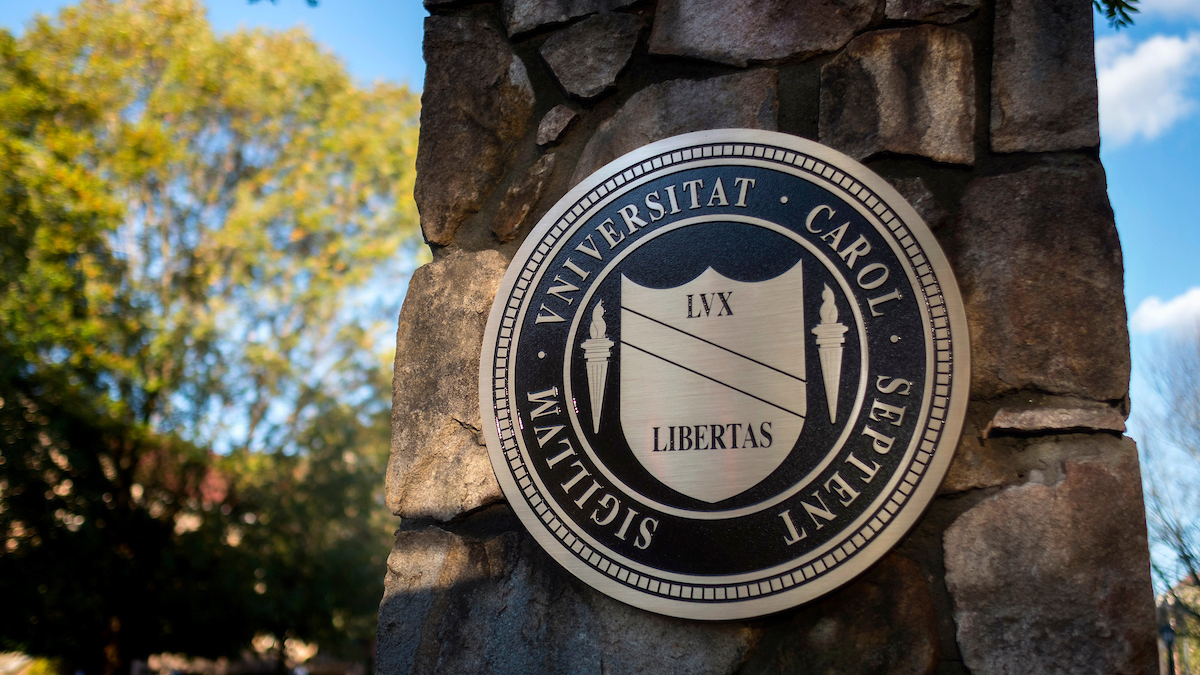 In response to a UNC System Board of Governors resolution, the UNC-Chapel Hill Board of Trustees voted Monday to propose a holistic four-point plan for the disposition and preservation of the Confederate Monument. A detailed University report outlining the plan will be sent to the BOG for further consideration.

The plan is part of the University’s ongoing efforts to fully recognize and tell its complex history as the nation’s first public university and to educate the campus community and the public on the lessons learned over the past 225 years.

The plan developed by Chancellor Carol L. Folt and the trustees includes relocating the monument’s statue and commemorative tablets that are on the monument’s base.

Based on public safety, the plan states a preference for relocating the statue and the tablets to a secure off-campus location, such as the North Carolina Museum of History in downtown Raleigh. That option does not comply with current state law.

The best option that complies with the law is a new, free-standing building on campus. The plan proposes to build a new University History and Education Center on the site of the former Odum Village to teach and commemorate the University’s full history.

“We are the only public university to have experienced our nation’s history from the start – war, slavery, Jim Crow laws, suffrage, civil unrest, as well as hope, freedom, emancipation, civil rights, opportunity, access, learning, and great discoveries fostered here,” Folt said. “All of these subjects will be covered in the proposed center.”

The plan proposes continuing and expanding efforts to add historical contextualization to campus. The Chancellor’s Task Force on UNC-Chapel Hill History has led this effort for three years. It also suggests creating a new McCorkle Place Gateway to commemorate the University’s history and provide space for reflection where the monument was originally located.

Following the toppling of the monument on Aug. 20, the BOG directed Folt and the trustees to present a plan for monument’s future. The resolution the BOG approved said the trustees’ plan must provide for a lawful and lasting path that protects public safety; preserve the monument and its history; and allow the University to focus on its core mission of education, research, economic stimulation and creating the next generation of leaders.

“We followed a thoughtful and thorough process to meet the charge set out by the Board of Governors,” Folt said. “Public safety is our strongest criteria. Our mission is to be an open campus where people can be active, study and do their work in a safe place. We have a long and important history to tell and this plan offers us an outstanding opportunity to tell it fully.”

The plan states the preference would be to move the statue and tablets to an off-campus location and identified the North Carolina Museum of History as a potential location, but such a move would not comply with current law.

“This is the safest option that both preserves the statue and allows for its contextualization and public access,” the report said. “While we acknowledge that relocation to an off-campus location such as a museum does not comply with the current law, our public safety concerns make it important for us to continue discussions concerning this avenue, even while moving forward with developing and seeking approval for an on-campus plan.”

The plan proposes moving the statue and tablets into a new free-standing University History and Education Center in Odum Village. The proposed center would be open and accessible to the public, would allow the University to contextualize the statue and tablets, house many other historical artifacts and exhibits about Carolina’s history, including its contributions and achievements, and would include display spaces, classroom space and an auditorium with interactive technology.

Odum Village is formerly the site of student family housing and is scheduled for demolition. According to the University’s 20-year master plan, this will be the next area of growth for campus.

“It is fitting that in our 225th anniversary year, we are pursuing what I firmly believe will be a positive path forward from a complex history, ever mindful that our University exists to faithfully serve the people of North Carolina,” said BOT Chair Haywood Cochrane.

A 2015 state law prohibits state agencies, including the University, from permanently removing an object of remembrance such as the state-owned Confederate Monument. Moving the object to a new location on campus, such as Odum Village, would require approval from the North Carolina Historical Commission.

Folt and the trustees ruled out recommending that the Confederate Monument be returned to its original location on McCorkle Place for reasons including public safety concerns raised by a team of national security consultants led by attorney Chris Swecker, a former FBI assistant director. The consultants concluded that if the monument was returned to an open area on campus such as McCorkle Place “it will literally be under siege.”

Work to contextualize Carolina’s history has been underway since May 2015 when the trustees voted to approve resolutions that included directing the campus to take a comprehensive approach in telling the full story of the University’s history and renaming Saunders Hall to Carolina Hall. One resolution called for studying the feasibility of a public space to house a permanent collection of campus history.

Folt then appointed the Chancellor’s Task Force on UNC-Chapel Hill History that September with a charge to recommend how best to curate and teach campus history. The task force developed a permanent exhibit in Carolina Hall and companion website to teach about a critical era in the history of North Carolina, the region and the University.

More recently, the task force worked on developing an historical interpretation of McCorkle Place, the site of the first buildings and the historic heart of campus. Those plans had included entrance signs and markers, as well as digital content.

The proposed McCorkle Place Gateway would serve as a commemorative space where the monument stood. The plan calls for a semi-circular wall with plaques that celebrate aspects of the University’s history. The site would be made of materials recognizable on Carolina’s campus, such as stone walls, local bricks and North Carolina granite.

This plan would also need approval from the North Carolina Historical Commission.

To develop the recommendation, the University leadership and the trustees reviewed more than 20 sites for safety, structural integrity and capacity to house the statue and tablets.

They considered several factors including public safety, preservation of the monument, input from the community, cost-effectiveness, potential disruption of University functions and legal issues. They also worked with national security consultants, who evaluated the general security climate on campus; the specific security challenges presented by the monument and the large-scale protests involving opposing factions that it attracts; and specific alternative locations for the monument from a public safety and security standpoint.

The University received input on the monument from students, faculty, staff and the general public, including suggestions sent to an email address the University set up to solicit open feedback. Campus groups provided input throughout workshops, forums, surveys and meetings. Most wanted the monument permanently removed or moved to an alternate location either off campus or within a contextualized setting on campus. Few people wanted the monument restored to its original location, the report said.

Read an email from Chancellor Carol L. Folt and Provost Robert A. Blouin about the plan for historical contextualization.

Read the full report and the appendices.