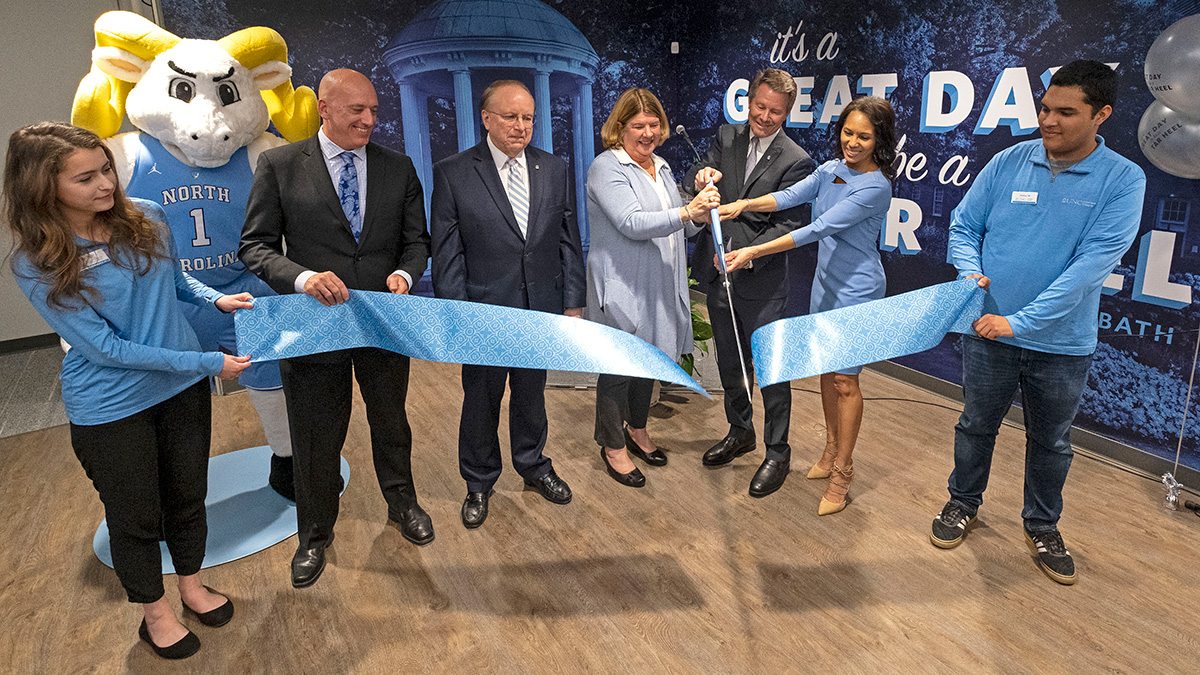 A festive arch of blue, white and silver balloons at its entrance emphasized the center’s role as the new gateway to campus from downtown Chapel Hill. The center, equipped with touchscreen technology and a life-size Rameses replica, is expected to draw more foot traffic than at its previous homes in Morehead Planetarium and, temporarily, the Hill Hall rotunda.

“Carolina and Chapel Hill have been neighbors and friends for over 200 years,” Guskiewicz told the guests gathered for the dedication. “Few universities, I think, have the kind of relationship, the strong partnership, that we are blessed here with at the University of North Carolina at Chapel Hill and the Town of Chapel Hill.”

To highlight that partnership, Chapel Hill Mayor Pam Hemminger and University Board of Trustees Chair Richard Stevens also spoke at the event. Aaron Nelson, president of the Chamber for a Greater Chapel Hill-Carrboro, and Laurie Paolicelli, executive director of the Orange County Visitors Bureau, were among the many guests gathered to show their support.

“All I can say is ‘Yay!’ This is wonderful. We are so excited and so pleased,” Hemminger said. “This is a crown jewel.”

Stevens recalled that he only visited Carolina’s campus once, as an 8th grader, before coming to school here. That was long before the first Visitors Center opened in 1989. “We had to wander around on our own,” he said. But at the new location, he predicted, “Thousands of people are going to come here to learn about a great university.”

Keep Reading ‘A rather remarkable feat’