For the last 75 years, the UNC Institute of Marine Sciences has conducted research, prepared students to serve the state of North Carolina and improved the lives of our state’s citizens. Over those decades, the off-campus teaching and research laboratory of the University of North Carolina at Chapel Hill has been continuously evolving to serve that mission as the representative of the University on the coast.

The Institute of Marine Sciences’ director Rick Luettich talks about the institute’s mission, how it’s evolved in the last 75 years and why the research produced by the institute’s researchers is vital to the state. 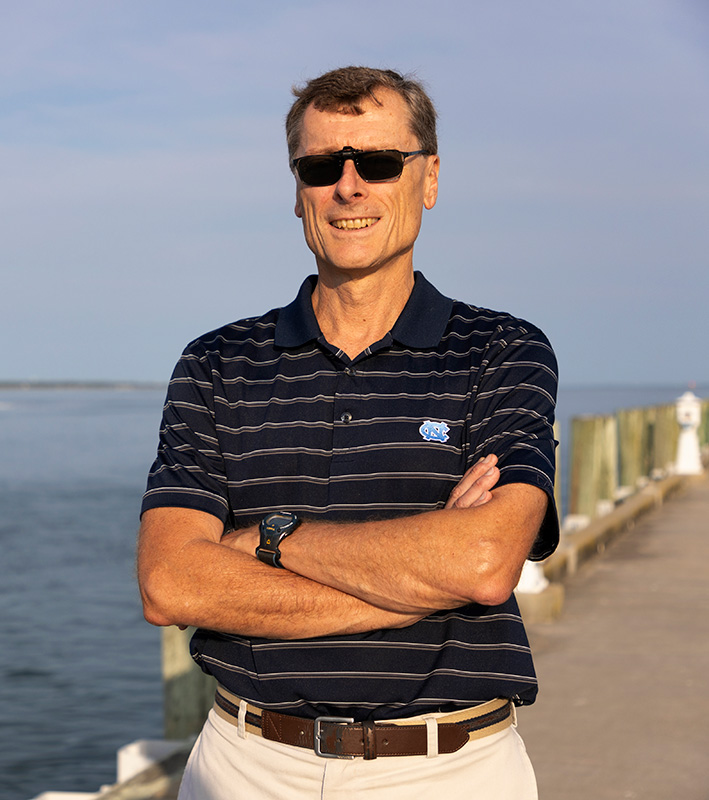 You’ve been with the institute since 1987. How has it grown?

When I arrived at the institute in 1987, its facilities had been neglected and were in very poor shape. Fortunately, in the 90s, a grant from the National Science Foundation, matching money from the University and a state-wide higher education bond referendum provided an influx of funds that fully renovated and added a new wing to our existing laboratory/office building and allowed construction of a shop/aquarium building, bringing the institute into the new century with greatly improved facilities.

Shortly thereafter, faculty retirements and departures allowed the hiring of new faculty who have since built highly successful research and educational programs focused around the institute’s mission of service to the state.

Over the past two decades, we’ve partnered with UNC’s Institute for the Environment to establish a highly successful, semester-long field site for undergraduates each fall. This has been a game-changer for involving students from the main campus at the coast.

How has the mission of IMS changed in the last 75 years?

The institute was founded in 1947 (as the Institute of Fisheries Research) to help the state develop its commercial fishing industry in support of eastern North Carolina’s economy. In the 1960s, as marine sciences became an established field, our name was changed to the Institute of Marine Sciences and our mission to serve the state through research, education and outreach broadened to cover issues beyond fisheries, such as water quality and coastal geology, that were gaining recognition as critical to the longevity and preservation of coastal North Carolina.

I think that our mission remains as vibrant, vital and essential today as ever, with even more critical coastal issues resulting from climate change, sea level rise, increasing storm hazards and a rapidly growing population that wants to visit and live at our coast.

What are some important research studies that the institute has facilitated?

An early success was a study by the institute demonstrating that catching shrimp is more effective at night than during the day because shrimp retreat to the ocean floor during daylight to avoid visual predators and swim up into the water column to feed in the dark. Those findings popularized North Carolina’s nighttime shrimping industry, which is now a key component of the commercial fishing industry.

The longest-running shark survey in the U.S. began at the institute in 1972, and we’ve been tracking changes in the shark population off the coast of North Carolina for the last 50 years. The population of the largest species, such as tiger sharks and hammerheads, has declined precipitously over much of that period, whereas the population of smaller species has increased. Fishing, warming waters and climate change all may have played a part in the population shifts. IMS research has also shown that shifts in these apex predator populations have impacted multiple levels in the marine food chain.

Hans Paerl’s 40-plus years of research into the causes of excessive algal blooms and fish kills in the great North Carolina Albemarle and Pamlico Sound Estuarine System has led to nutrient runoff regulations to help protect these water bodies. Taking advantage of technological advancements, we are now monitoring the health of Pamlico Sound using instruments mounted on NC Ferries that cross the system multiple times each day.

Rachel Noble’s development of PCR testing for water-borne viruses has dramatically changed the speed and accuracy by which we can assess the safety of our waters for recreation and shellfish consumption. Early in the COVID pandemic, she adapted this technology to test wastewater for signs of COVID at community scales. She is now leading wastewater testing across the state of North Carolina to monitor for early signs of COVID outbreaks, indicating how the institute’s research is serving the state beyond our coastal waters.

How is the Institute of Marine Sciences celebrating 75 years?

We have a number of exciting activities planned.

On July 8, we plan to begin painting a three-story mural on the institute’s front wall that reflects our science, past, present and future. We will be engaging the IMS and area communities in the mural creation and, as the face of Carolina at the coast, we are excited to share the convergence of science and art through the mural.

In the fall, we are hosting an academic seminar series that features alumni of the institute. We look forward to reconnecting with alumni and strengthening the network of current and former institute researchers.

We’re also in the final step of receiving the 17-acre Philips Island, near the mouth of the Newport River. Philips Island sits very close to the current sea level, and therefore its long-term fate will be strongly impacted by climate change and sea level rise, perhaps mirroring other North Carolina coastal and estuarine islands. We believe this gift will provide an incredibly valuable field site for studying these changes as they occur.

As the director, what does the 75th anniversary of the institute mean to you?

First, it’s an opportunity to step back and reflect on the institute’s mission and the many ways in which our faculty, students and staff have served the citizens of North Carolina through our work. I believe in this regard, history will judge us well.

Second, it is an opportunity to look ahead and consider how we can have the greatest impact moving forward. In addition to planning new research and service initiatives, the institute was recently merged into the Department of Earth, Marine and Environmental Sciences in the College of Arts & Sciences with the accompanying expectation of more on-site teaching at the institute. I am particularly proud of the quality and accomplishments of our latest generation of faculty and have the highest confidence that they possess the vision and skills to successfully lead the institute into our next 75 years.