Eric Chilton remembers the day that Rameses slid across the court for the first time during a men’s basketball game in the 1987-1988 season.

A senior studying broadcast journalism at the time, he can recall a lot of the details of that day — the cheering, the excitement, the lead-up to the reveal — though none of them too vividly. As the man inside the Rameses costume, the only view he had was through a 6-inch hole in Rameses’ mouth. The cheerleaders even needed to guide Chilton off the court after his grand entry because he couldn’t see well enough to get himself there.

It wasn’t glamorous inside that Rameses costume that afternoon, but that game started a now-treasured tradition that Carolina students carry on today, more than three decades later.

“There’s no way I can describe how proud I am to do something with the University that I’ve loved since I’ve been in this world,” Chilton said. “It’s some sort of legacy, something I could do. I can say that I started something that I don’t think will ever go away.”

In the late 80s, Carolina was the only team in the ACC that didn’t have a costumed mascot. The University, of course, had the live animal Rameses mascot that began attending football games in 1924, but not a mascot that could attend all games. The Carolina Athletic Association wanted to change that for the 1987-1988 basketball season.

Chilton decided to try out for the role and now calls the experience “the weirdest audition ever.”

“They go ‘OK. We got the ball. We’re down by two, and there’s 10 seconds left. What do you do?'” Chilton said. “I just jumped all over the place and was very animated. I remember turning around and shaking my butt. It was crazy. … I don’t know how the heck I got it, but I got it.” 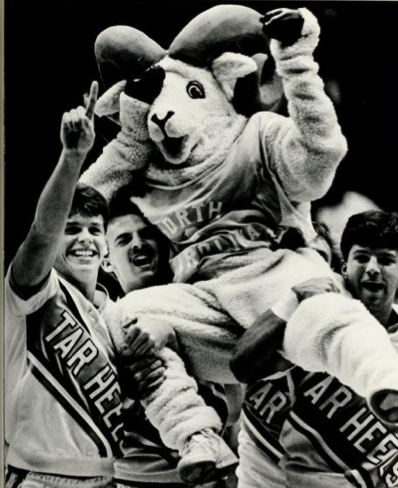 Chilton practiced his routine in secret for a few weeks, sneaking a large bag out of his fraternity house and to a trusted friend’s apartment to put on the costume and practice. The rehearsals didn’t entirely prepare him for the first game, though. Chilton said he was a nervous wreck before the announcers introduced him to the crowd.

“I was so nervous I couldn’t even hear what they said,” he recalled. “I ran out, slid across the floor and just jumped around. I could hear the crowd going crazy. It was amazing. I’ll never forget that moment as long as I live.”

Though students were excited about the mascot, the actual costume wasn’t a hit. The suit was made with clay horns and a friendly face.

“It wasn’t quite as threatening as it should have been,” Chilton said. “Instead of a ram, it looked like a very disgruntled lamb.”

A new, much tougher and more aggressive-looking Rameses was revealed a few years later. The new Rameses began his reign over the sidelines in 1989, sporting a Carolina jersey and a small cap between his horns.

This version of Rameses roamed athletic and community events until the late 90s, when a new costume — the one Tar Heel fans see today — was created. Dropping the angry scowl, this Rameses had a friendlier face. But he kept the muscles.

Daniel Wood’22, who was Rameses for four years, said the current mascot can be described simply: “He loves two things. He loves working out, and he loves the Heels.” 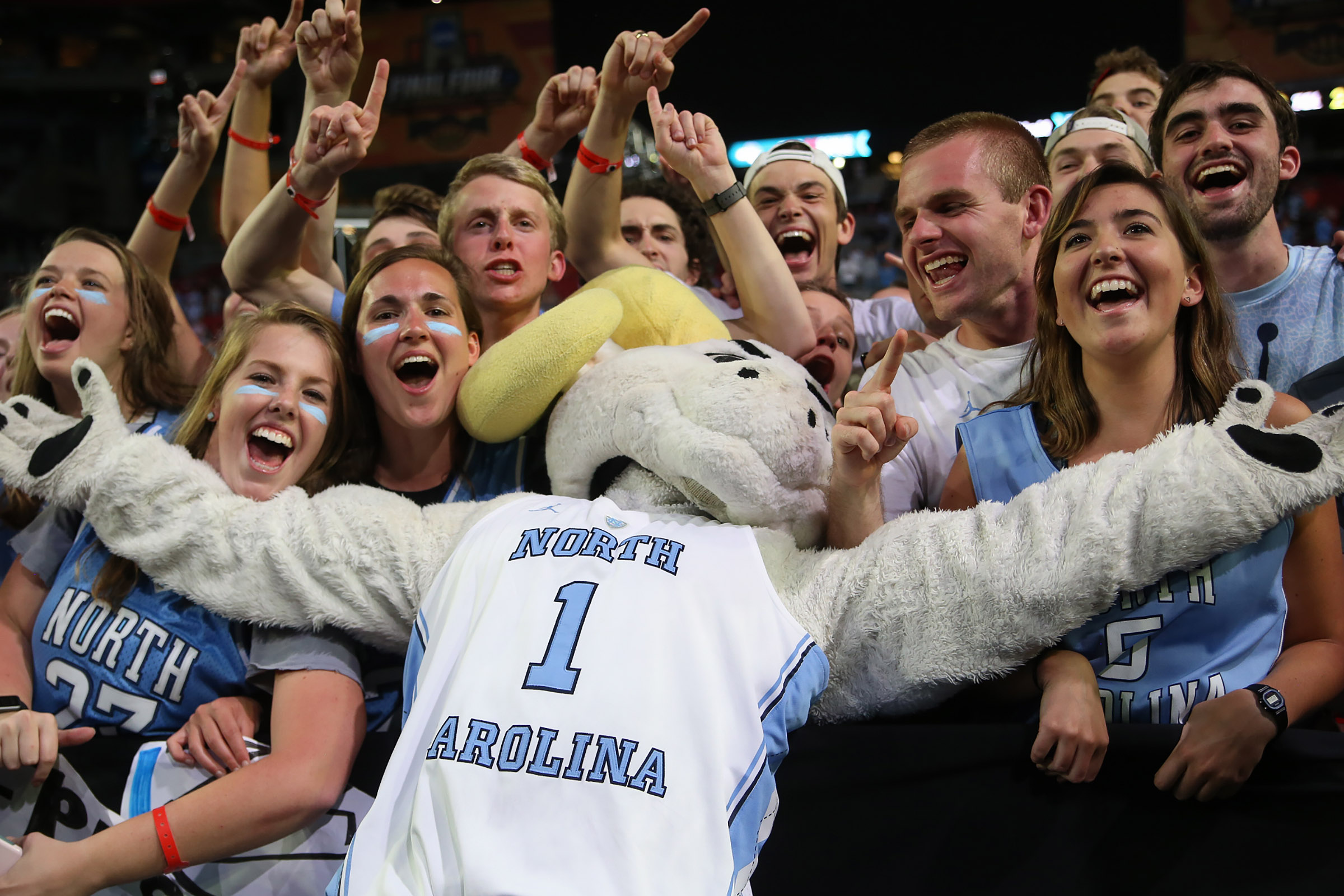 An addition to the family

After nearly 30 years of Rameses, the Carolina Spirit Team decided to add a new ram to the family: Rameses Jr., or RJ. The son of Rameses, RJ debuted at Late Night with Roy in October of 2015. With Carolina Blue horns, a smaller stature and fewer hours spent in the weight room, the new mascot was designed to be less muscular and more welcoming for younger Tar Heel fans.

Katherine Brinkley ’17 was one of the first students to become RJ, landing the gig after trying out her junior year.

“The great thing about Rameses Jr. is that he’s known for being a little mischievous, and that’s what I love,” she said. “They told me when I started, ‘You’re going to act like a kid. Just pretend like you’re 6 years old again.’ That’s what everybody wants to do. Everybody misses childhood, being able to act like a kid. That’s exactly what I did.”

The new mascot also helped the spirit team meet the increasing demand for Rameses to attend various events. As RJ, Brinkley appeared alongside Rameses and also attended games alone. Being on the sidelines had its allure, she admits, but she most enjoyed interacting with the community — specifically meeting with patients at UNC Hospitals’ pediatric oncology clinic, where she volunteered sans costume, too.

“I would see these kids in the morning as myself, and then I would get to see them again in the suit,” Brinkley said. “It was great to make their days because it made my day. You would be surprised by the amount of people who would talk about their lives with RJ.” 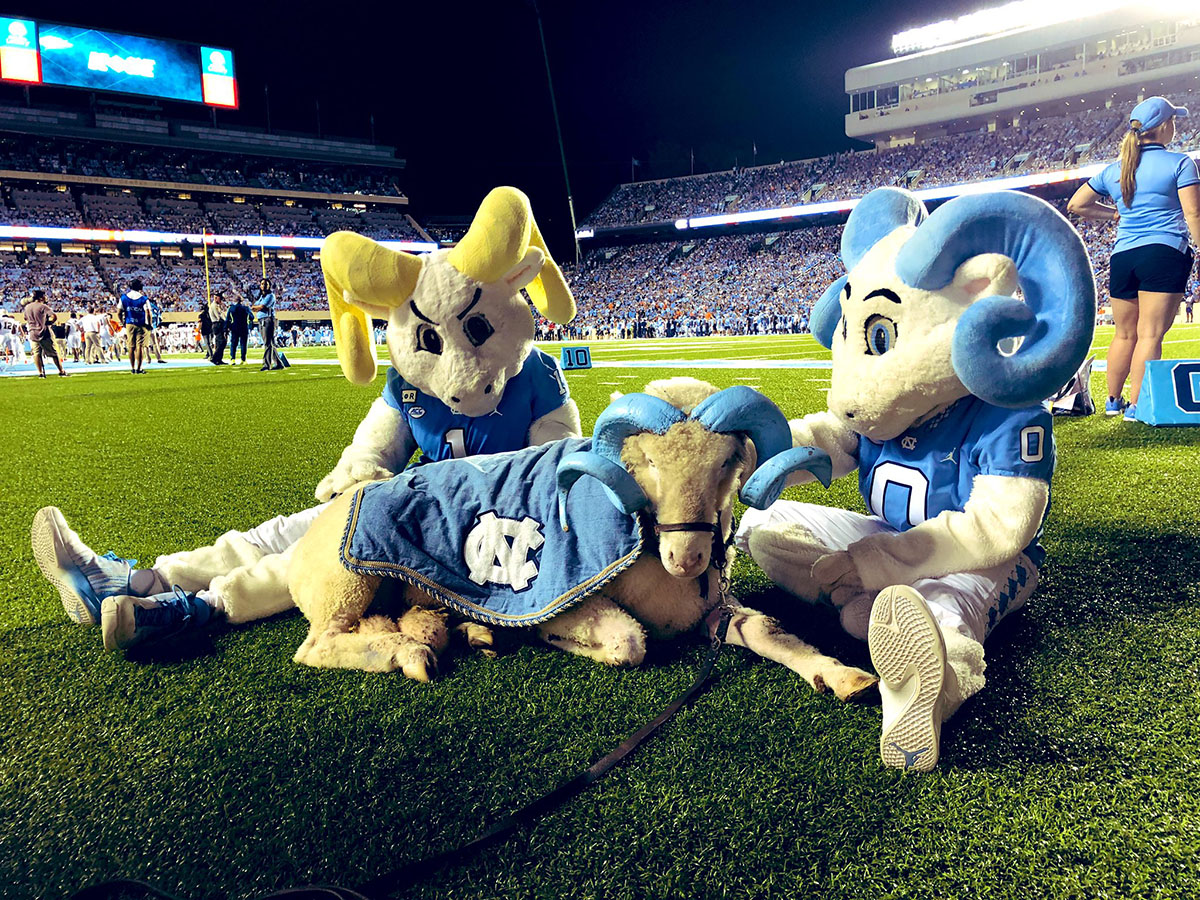 Rameses and RJ with the live animal Rameses mascot at a home football game. (Photo from @RJ_UNC/Twitter)

Though the students find themselves on the side of some of the biggest games and the focal point of hundreds of events, being Rameses isn’t always easy. Students are involved in every part of the Rameses and RJ operation, from game days to community events to commercial shoots. Between games and community events, Brinkley spent about 30 hours a week as RJ during her senior year.

“Even with the time we’re in the suit, it’s so much more time scheduling events, spending time planning out costumes and skits,” Wood said. “Football is the entire day, sunrise to sunset, then you probably have two or three events during the week. … It’s hard. It’s a very tough balance.”

And all of this is done in complete secret, with the students behind the costumes staying anonymous until they graduate. But Wood wouldn’t trade those busy days for anything. His years in the suit were the best years of his life and helped him find his place at Carolina.

Brinkley, Chilton and Wood all view their time in the costumes as being part of something bigger than themselves.

“Carolina means things to people,” said Wood, who is now the first mascot coach for the Carolina Spirit Program. “It’s taught to our mascots that you have to be able to appreciate what Carolina does for people, what it means to people. Being Rameses is the biggest representation of that, and you get the opportunity to portray that. ” 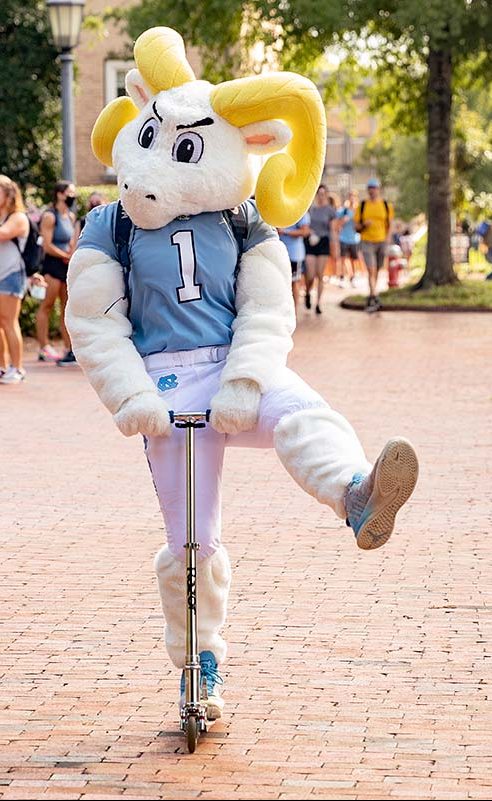 Rameses rides a scooter around campus on the first day of classes in 2021. (Photo by Johnny Andrews/UNC-Chapel Hill)

Wood added his own quirks to Rameses during his time in the suit — like slapping his horns to get the crowd fired up — but it was following in traditions that meant the most to him.

“The most fun moments I always had were when you’re doing iconic things like Rameses playing guitar at football games,” he said. “A tradition I don’t think people always notice is that at every home basketball game, Rameses goes out and rubs center court before tipoff. That’s a big tradition for us. Watching people do that for years, and then finally getting to do it at my first basketball game was a moment that I got choked up.”

Being part of that legacy brings pride even after graduating, Brinkley said.

“It’s something that I’ve carried with me, and I think about it every day,” she said. “Most people think being a mascot is kind of silly, but it’s so cool to do something that brings joy to so many people. It’s unlike anything I’ve ever experienced.”

Even though they’ve all hung up their horns, the former mascots are forever part of a unique family of Tar Heels who have worn the suit. And whenever they’re at a Carolina game, they’re keeping their eyes out for the most recognizable fans in the crowd.

“My kids always make fun of me,” Chilton said. “I want to watch what they’re doing, and I find myself smiling, looking at that, just knowing how great a feeling that is when you’ve got that crowd in the palm of your hand, or you have that little kid that just loves it.”

Interesting in being RJ? The spirit team is holding tryouts for the mascot in August.