With the help of dozens of student volunteers, who have spent more than 500 hours collectively interviewing community leaders across the state, Carolina Across 100 is well underway.

The initiative aims to partner the University with North Carolina’s 100 counties and, by working with local leaders, help identify and address issues impacting communities across the state following COVID-19. 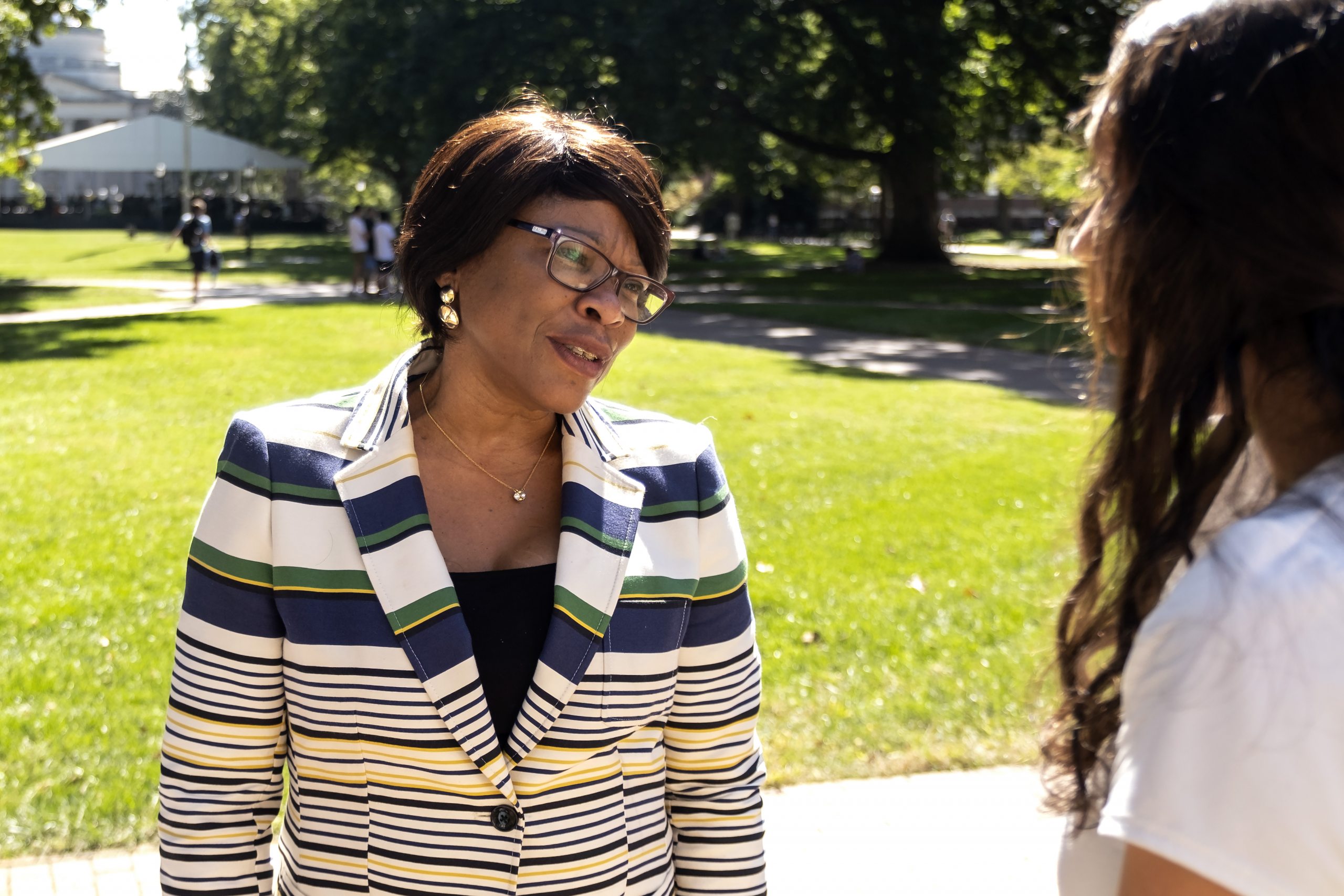 Brown-Graham talks with a student at the Oct. 15 Carolina Across 100 awareness event. (Jon Gardiner/UNC-Chapel Hill)

Brown-Graham said she is inspired by Carolina Across 100 for two reasons.

The first stems from joining the 2019 Tar Heel Bus Tour and seeing how much Carolina was already contributing to the state.

The second is noting from the onset of COVID-19 that communities across the state were struggling, not just in terms of public health, but also economically and with educating their children, and Brown-Graham said it feels like the right time for the University to step up its support.

She said that the initiative is completely consistent with Carolina’s history. It is a version of what Carolina has been doing since its inception.

While the University’s efforts are a collaboration between faculty, staff and students, it has been largely students who have started the ball rolling.

“The level of energy, commitment and creativity from students has taken it to new heights,” Brown-Graham said.

And it’s not just students from North Carolina, she said — it’s Carolina students from across the nation, and even international students.

“They understand that this public university is supporting them, and they feel that they owe it to the communities of North Carolina to give back,” Brown-Graham said.

Jessica Dorrance, ncIMPACT research director, said that the team hopes to engage 20 to 25 communities each year throughout the five-year initiative.

Dorrance says a student launch team, comprised of a graduate student and three undergraduate students, started the work last summer by conducting “key informant interviews” with people across the state. Through these initial interviews, students found out what was important to around 20 stakeholders who are influential in their communities.

“After the students helped lay that foundation, they’ve continued to be engaged, and we’ve expanded their role and engagement,” Dorrance said.

More than 60 students have been involved in conducting interviews so far, and the initiative is looking to build more ways to involve students in the work.

They also conducted a survey with about 3,200 stakeholders from across North Carolina. About 35% of respondents worked in the public or government sector, about 24% worked in the private sector and roughly 17% were in the nonprofit sector.

“We were thrilled with the response we received to the survey,” Dorrance said. “We collected information from every one of North Carolina’s counties. Leaders are eager to talk about what their communities are experiencing.”

In addition to the survey, they have qualitative data from interviews conducted by undergraduate and graduate students across disciplines, majors and professional schools at Carolina.

All the interviews were conducted virtually. Most students worked together in pairs to conduct a first interview and then worked on their own to conduct additional interviews. Students were trained in best practices by experts from Carolina’s Odum Institute for Research in Social Science.

After collecting and analyzing the data, they shared it with the Carolina Engagement Council. The council is now providing guidance about next steps.

In addition to guidance and support from the Carolina Engagement Council, Dorrance said the role of faculty and staff will be expanded as the work continues, but right now, the work of students has been instrumental in getting the initiative off the ground.

“It’s been so amazing seeing how enthusiastic students have been to engage in this work,” Dorrance said.

Caitlin Lancaster, a junior studying political science, was part of the student launch team over the summer. From August through October, the interview process, which they called “deep listening,” opened up to more students across campus. Lancaster continued to work with ncIMPACT through the fall semester. Lancaster and two graduate students have been recruiting student volunteers for the initiative.

“What’s great to me is that students are leading the way,” she said. “It’s not just University faculty and staff who are assigning students work.”

So far, they have conducted about 70 interviews with stakeholders from across the state.

Lancaster said that some students volunteered because they are not from North Carolina or they’re from a rural area and want to learn more about the urban parts of the state.

“We had some students from out of the country say, ‘This is my first time in North Carolina, and I joined the Carolina Across 100 initiative as a student volunteer because I wanted to learn more about the challenges facing the state and what I can do to help,’” Lancaster said.

Dorrance said that the initiative is trying to aid in these challenges without being prescriptive and telling communities how to fix their problems. Instead, it aims to center community voices.

“One of the things that really struck me that we heard in our data is that something like 94% of people think the impacts of the pandemic will be long-term for their communities,” Dorrance said. “This is not something people are seeing their way out of really quickly or easily, so talking about it as if we’re in recovery feels untrue for most people.”

At the initiative’s first public event, held on a sunny afternoon in October on the quad in front of South Building, student volunteers, passersby and even the Chancellor placed stickers on a map of North Carolina’s 100 counties, choosing the county they felt most connected to.

Sage Staley, a junior studying political science, put her sticker on Rowan County, where she grew up. She wrote about the annual Cheerwine festival in her hometown of Salisbury, which she says brings in crowds from all backgrounds and cultures.

Staley said she feels it is important for students at one of the top state universities to form relationships with stakeholders across all 100 counties. She said this program gives students opportunities to help North Carolina and gives students — even those who hail from other states and countries — knowledge about the state where they attend school.

Christopher Gsell, a master’s student in computer science, came to Carolina from Texas because he fell in love with the campus. He joined the initiative because he wanted to learn more about how the COVID-19 pandemic has affected the state and its counties. He said that coverage of COVID-19 is often focused on a national scale, and he wanted to see how people were faring at a local level.